The “Alt” or Old bier traditional method of brewing ale was popular in Düsseldorf way before the advent of refrigeration and puny lagers.

Rüdiger Adelmann, our uncompromising master brewer, and Lena Backes, our deputy master brewer, are the Füchschen Brewer. They user the same top fermentation method and the same genetics of barley and in house yeast strain as generations of his predecessors in order to meets the stringent requirements sought after by the brew’s fanatical following.

Crushed malt and Düsseldorf water are slowly heated in our mash kettle. This process converts the starch from the malt in to usable sugars, thus producing the flavorful wort. 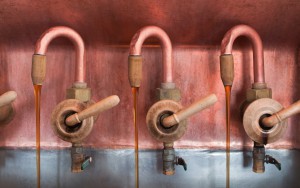 Another kettle is used to separates the malted solids from the wort and it’s dissolved sugars. After this filtration stage, the wort is sent to a boiler while the spent malt solids, the Treber, are trucked away to be fed to some happy Westphalia cows. We also use the Treber to make bread, which is served at the brewery. 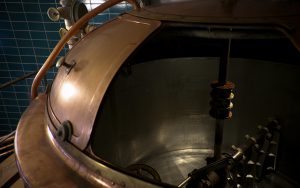 The boiling stage is a crucial stage that is used to sterilize and stop the enzymatic process of the wort. This is the magical stage where our secret species of hops are introduced to determine the final flavor profile and intensity of the final brew. 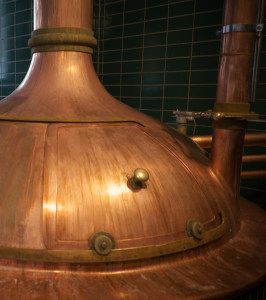 In this stage the hopped wort is circulated in a centrifuge in order to remove the coagulated proteins and hop solids (the trub) from our mixture before the fermentation stage. 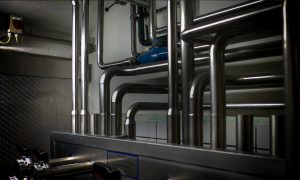 Hopped wort is then slowly cooled to around 16 degrees Celsius. The heat that is removed from the wort is transfered to the water used in the mash in order to maximize the efficiency of the next batch. This is where our proprietary yeast species is added to to promote the top fermentation and trigger the production of CO2 and and alcohol. A lot of he yeast that is found at the top of our open fermentation tanks is now removed and can be re used for up to three or four more brews, a process that has remained unchanged for centuries. 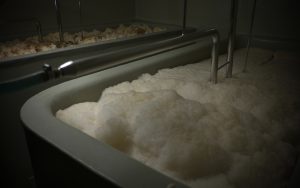 The complex flavors and aromas of the brew are made possible by a temperature controlled maturation period of 2-4 weeks. After this process the remaining yeast is removed and the beer is ready to be bottled or poured and served. 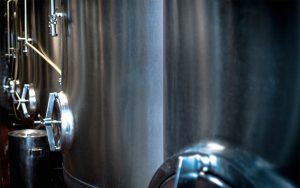